Michael Bloomberg wants to meme his way into the presidency in 2020. He’s using the same disastrous promoter as the Fyre Festival.

The campaign seeks to enlist a large amount of social media influencers with massive followings to promote pro-Bloomberg content.

“Mike Bloomberg 2020 has teamed up with social creators to collaborate with the campaign, including the meme world. While a meme strategy may be new to presidential politics, we’re betting it will be an effective component to reach people where they are and compete with President Trump’s powerful digital operation,” a statement reads. 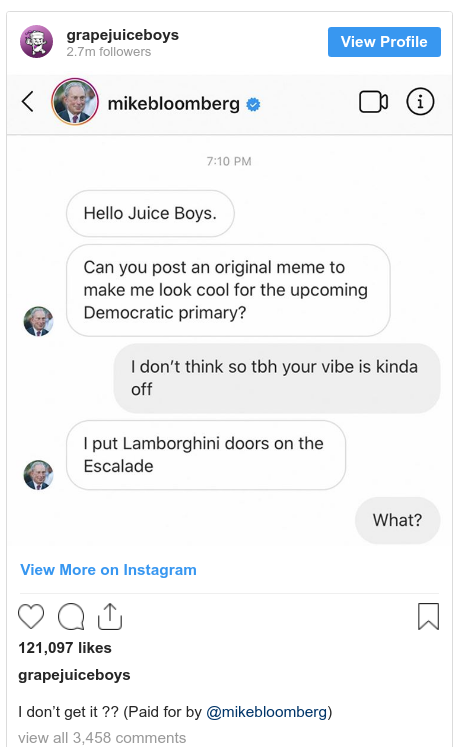 Bloomberg is fine with self-deprecating memes – the whole point is to get his name out there. But not everyone is happy that memes are being hijacked to promote another billionaire president.

One director of influencer marketing at BrandFire, George Resch, drew criticism for sharing a sponsored meme. Resch says the memes and paid ads aren’t endorsements since they’re all careful to say Michael Bloomberg paid for the memes.

Several of the memes appear as text messages from Mike Bloomberg to the influencer paid for the ad. Some of the ad-memes are non-sensical, even to the people who are paid to post them. Bloomberg began targeting social media influencers shortly after the Iowa caucuses, according to The Daily Beast.

Influencers on the Tribe platform report receiving offers of $150 to create content that shares why Michael Bloomberg is “the electable candidate.” That content is then shared across the network and on ‘meme profiles’ on the network.